No products in the basket.

Put a little Pop Art on Your Walls This Season! 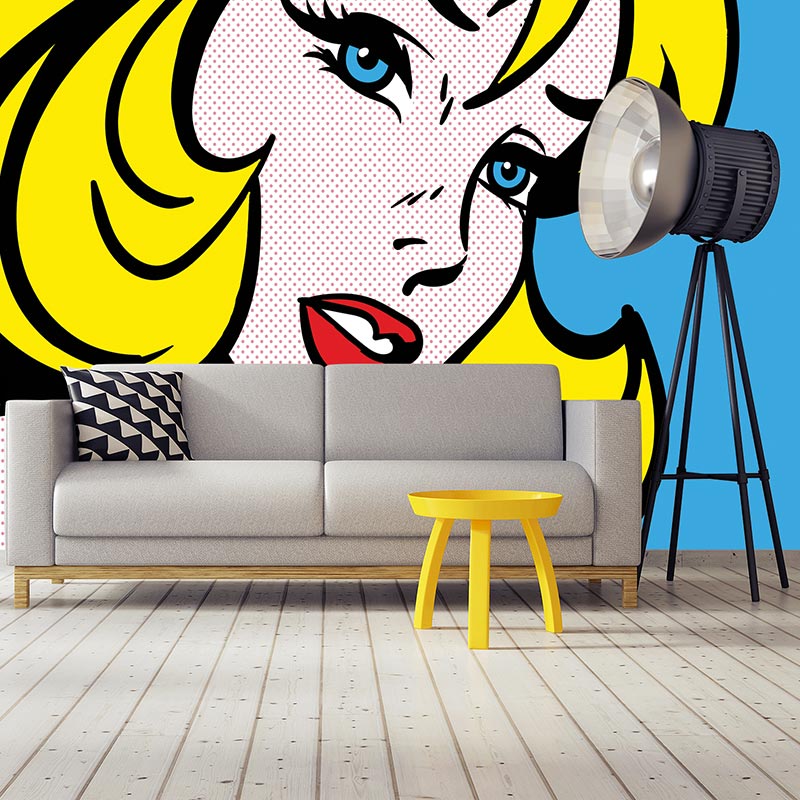 For years, on the wall in my little cubbyhole of an office were two framed prints from the Tate.
One showed a plane tilted precariously on its side enveloped in reds and yellows in the milliseconds after being struck by a missile. One misspelt word above it followed by an exclamation mark – an onomatopoeia (apologies, big word for a Monday!)
The other was an illustration of the plane firing the missile. A short sentence in a bubble above, ‘I pressed the fire control….’ The perfect angle, our viewpoint looking down the plane directly sighted across to its intended target.

They hung either side of my window, projectiles blasting from one side of the roller blind to the other. It was only when moving offices did they come down and (not yet) go back up. – Note to self, something to do this weekend.

These prints, of course, are the two works of Whaam! by Roy Lichtenstein.
Based on a comic book drawing from 1962, it was the bold defined lines and colour that first drew me in. The mystery of the battle – no story arc to explain its narrative – that kept me intrigued.
A deceptively simple comic book style that lit my imagination for many years whilst hung up on the wall. This simplicity, its sense of time and place, the Whaam! font diagonally across the second panel and the almost blasé report from the missile’s launcher – it’s these things that make it something special to me.
Along with the fact it’s just a great slice of pop art cool! 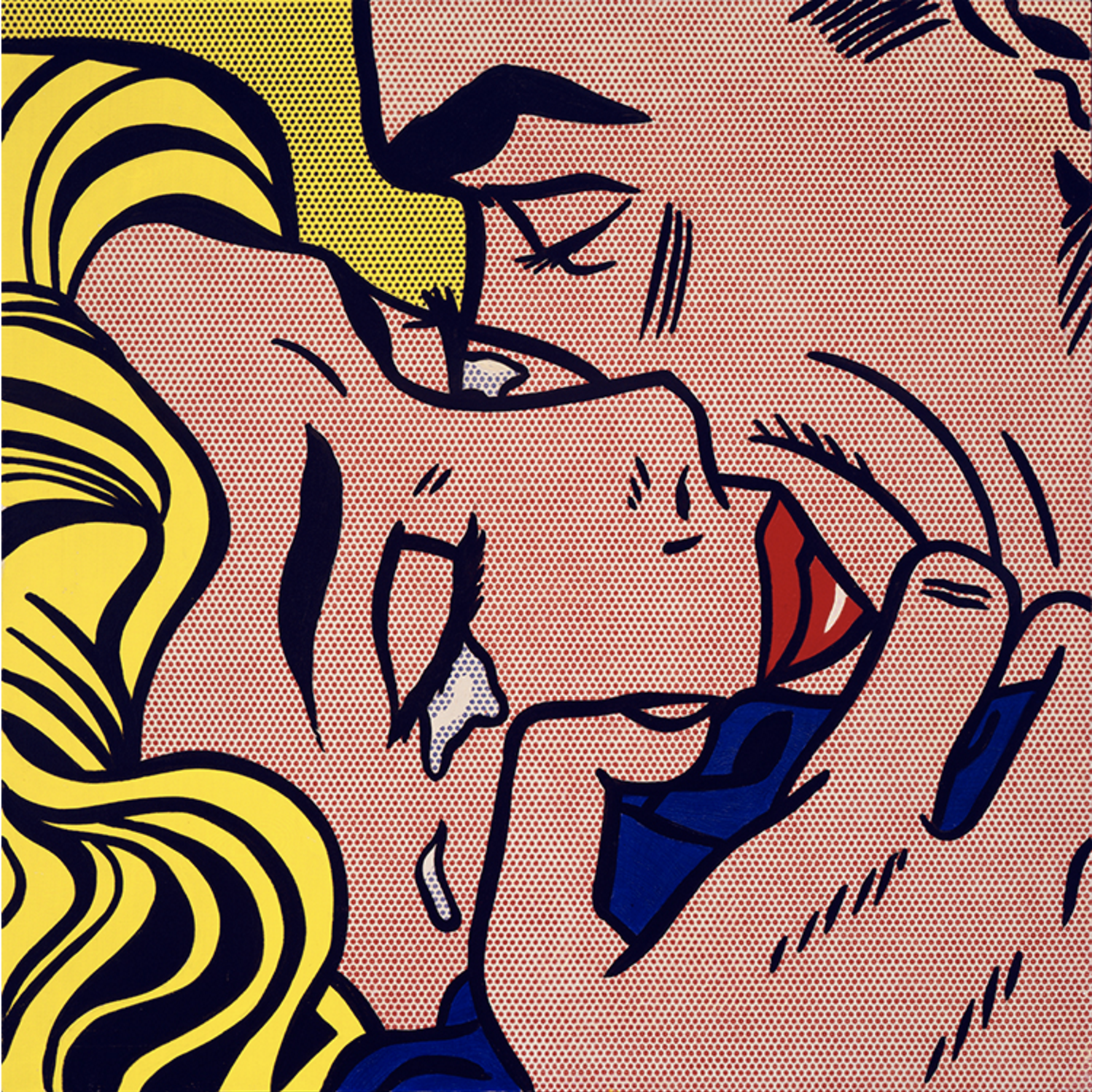 I’m not too sure whether its an age thing (my age!) but that’s the way with Pop Art.
Is it because of its foothold in the 60s, the characters and artists, or the work itself? It is certainly one of those art moments that grabs you by the lapels and doesn’t settle for less than full attention.
The works of Andy Warhol – simple screen printed soup cans and repeated Marilyns or Elvii (is this the plural of Elvis?) – images that once seen create such a lasting impression.

Close your eyes for a moment, think Pop Art.
I bet it’s one of Warhol’s works that springs to mind.

Pop Art took the every day – a can, a comic book – and by representing it through paints and inks found a new way of breaking with established traditional themes. In the UK we had Peter Blake and David Hockney creating artworks in similar styles – Pop Art stretching firmly across the globe.

Now we are years after the movement, it’s easy to forget the impact of Pop Art. In a contemporary art world of Emins, Hirsts and Banksys, older sometimes loses its edge.
It’s like playing a Hendrix album to your kids and being told that Ed Sheeran also plays guitar, you know! 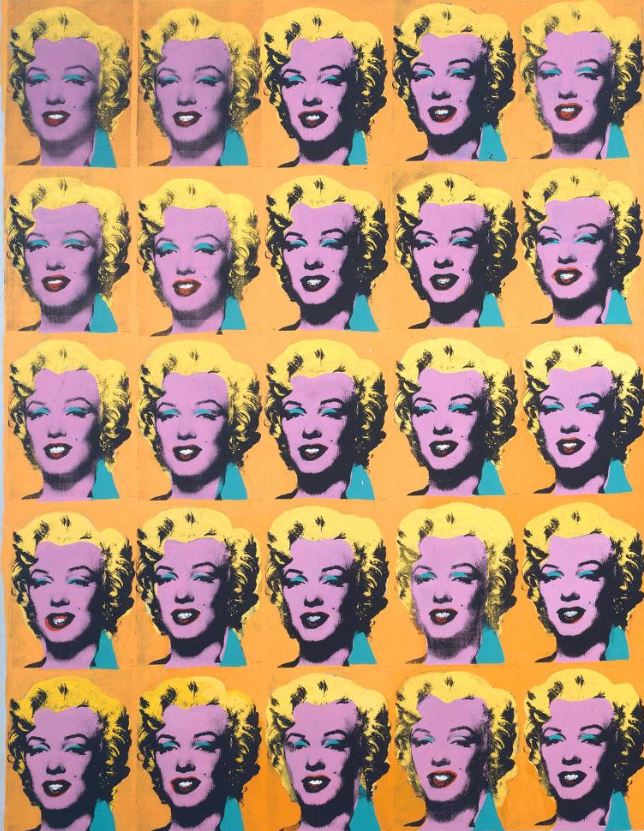 Pop Art made an indelible mark on the culture then and still causes many ripples now. We wanted to source a small series of designs that hopefully follow in its large footprints.
Created for impact on a wall at home as a printed bespoke wallpaper, or for in the kitchen or bathroom as a glass splashback, these would also look fantastic in a commercial wallcovering project.

Imagine a hotel lobby or behind the bar with one of these emblazoned across the wall – wow!

We’ve added an option in that’s just a bit different from the norm. Either leave the speech bubbles blank for impact and intrigue or let us know your story and we’ll fit in place. We’ll always email you a proof to see what you think. Clever, eh? 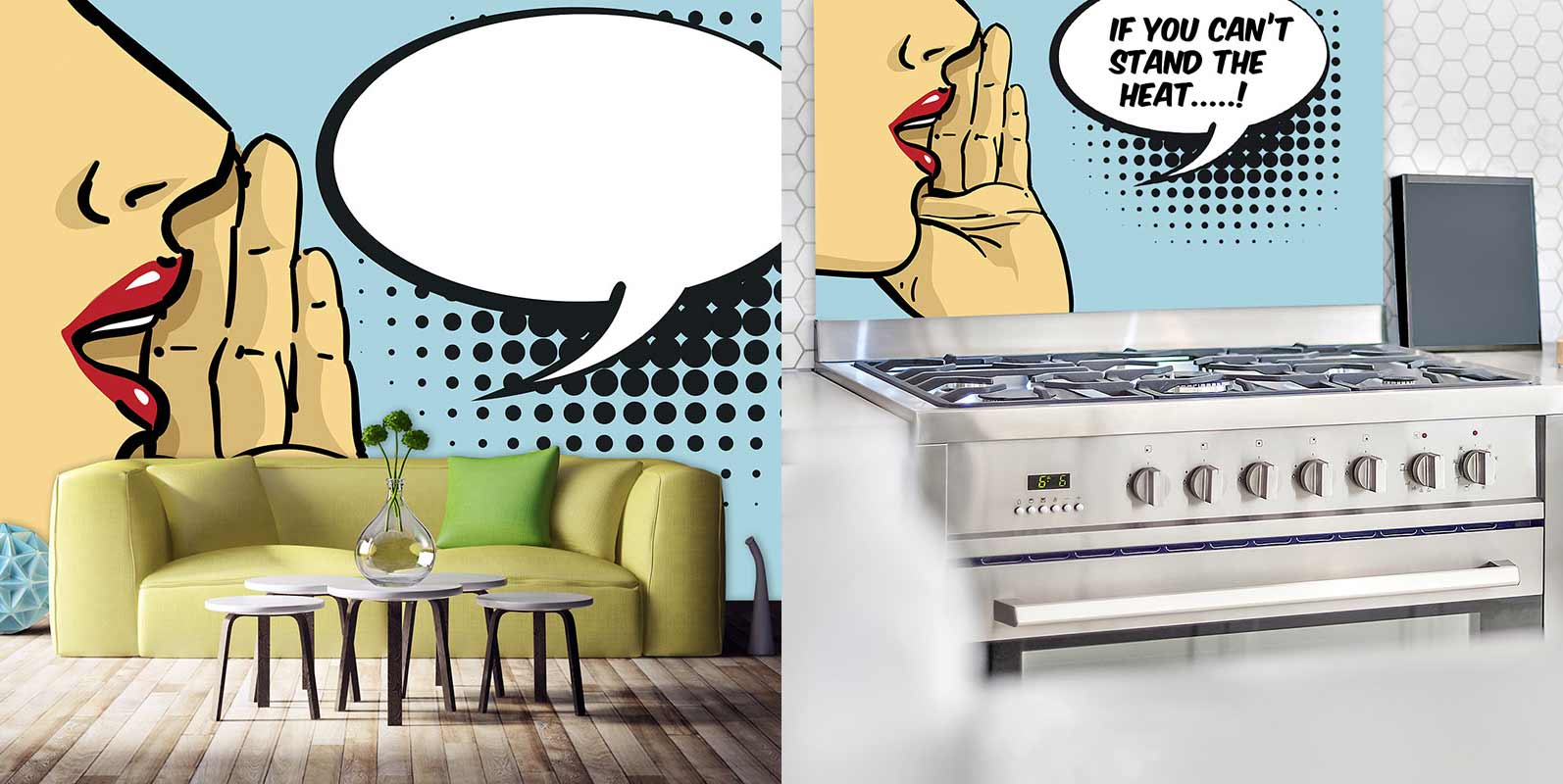 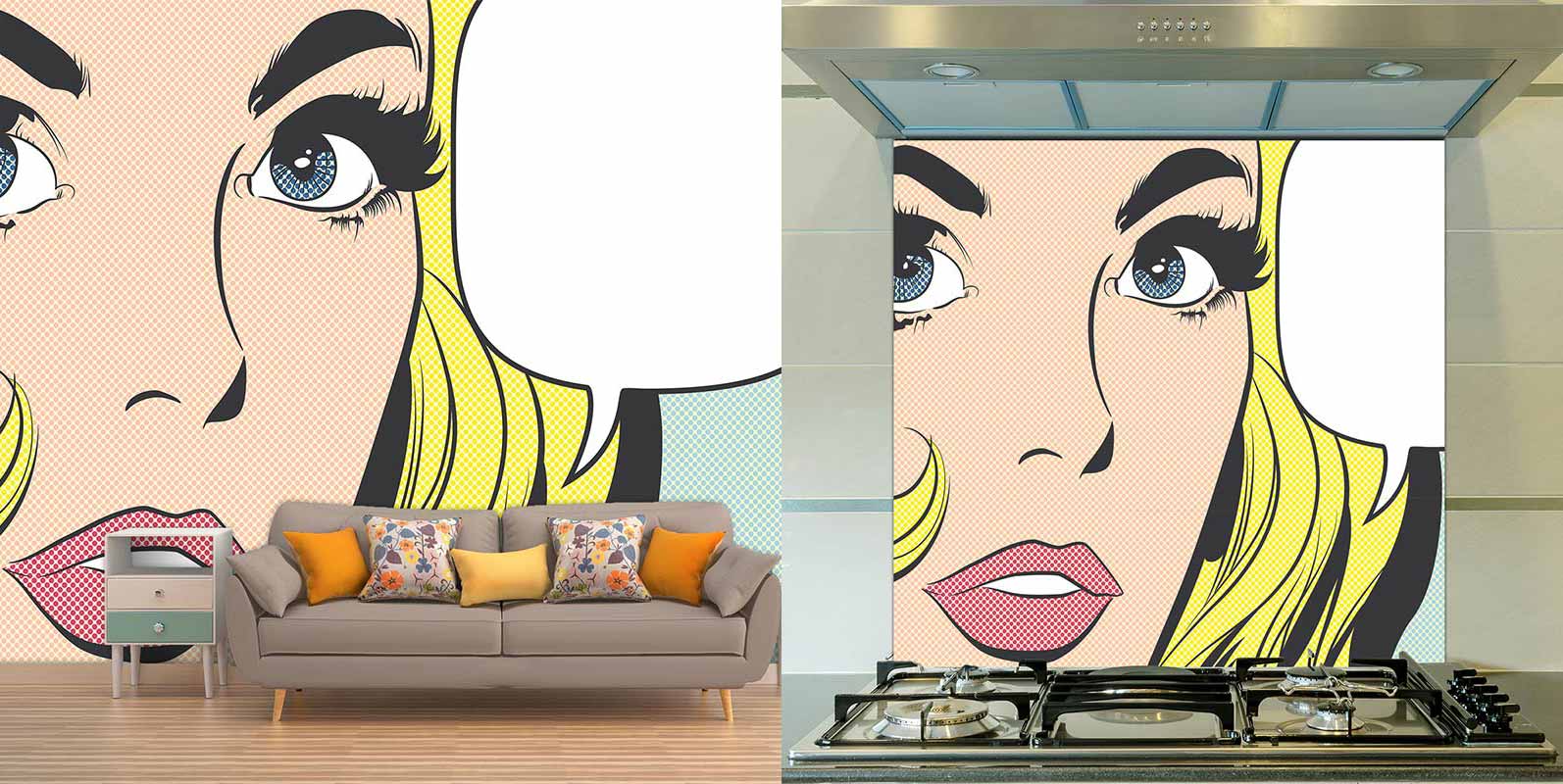 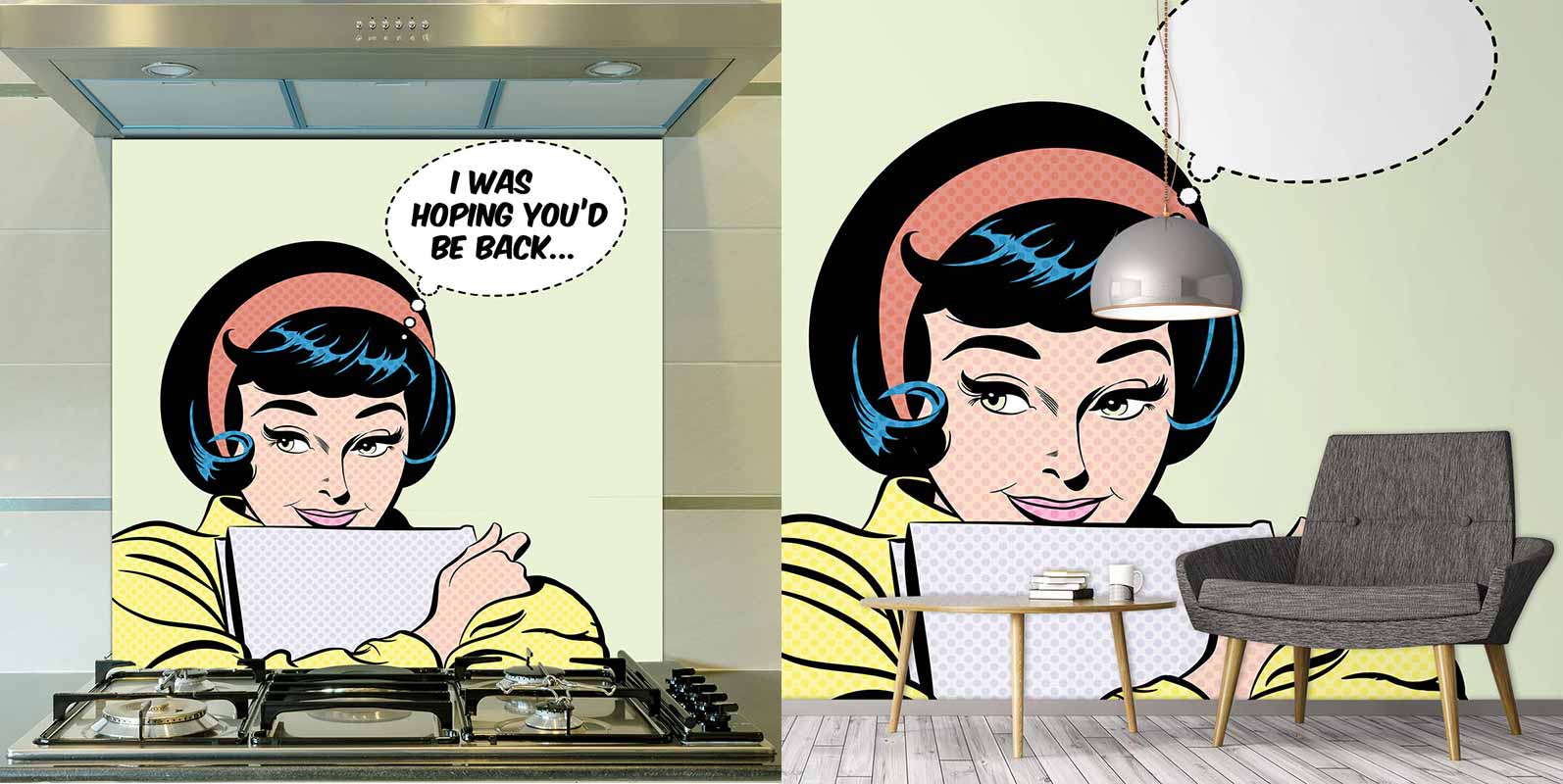 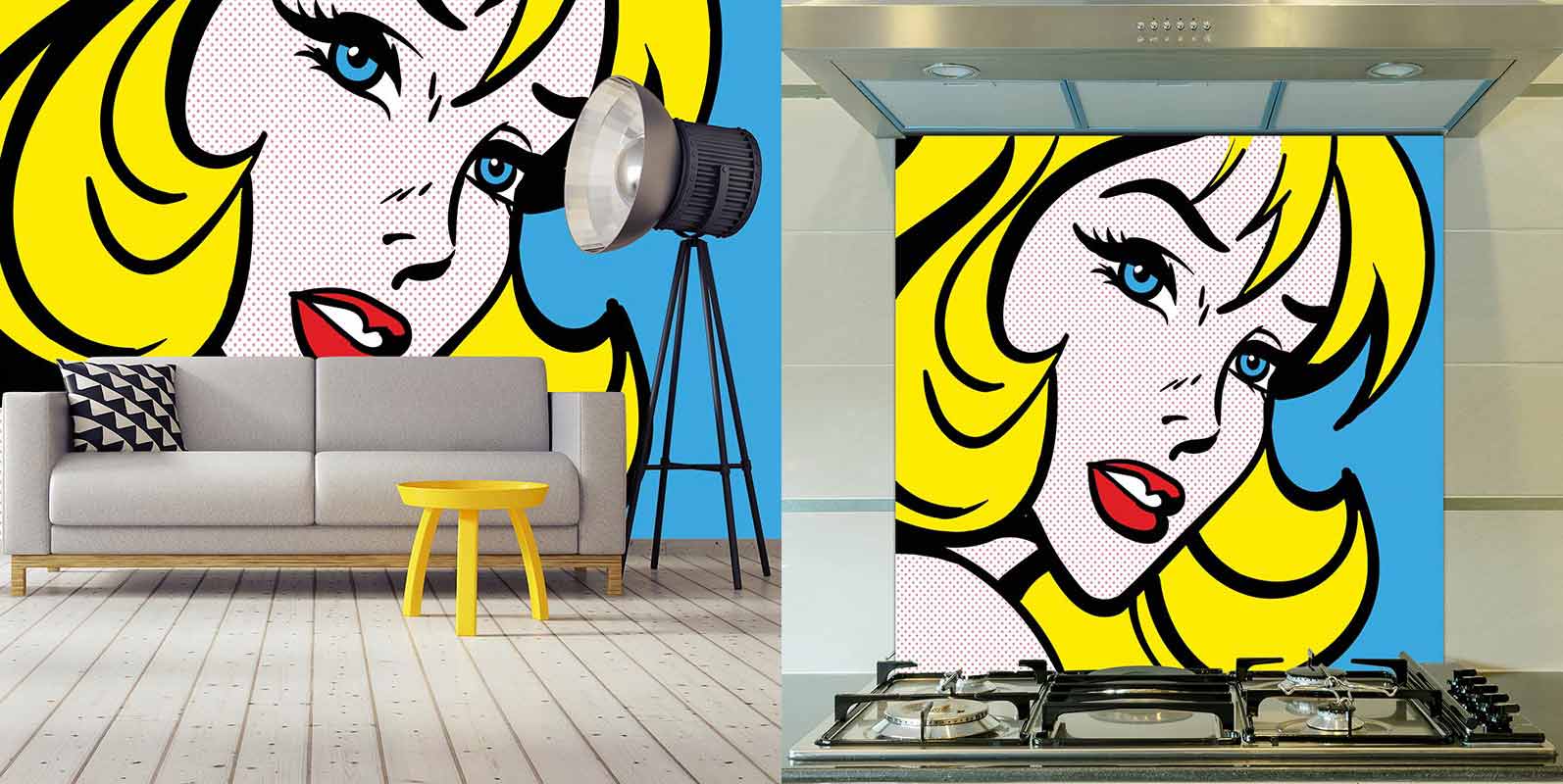 We love the serene and the floral for wallpapers and splashbacks. There will always be a place for classic large floral images in the home, but sometimes only the big and bold will do!
Make a real statement for your next feature wall. Made to measure wallpaper with no fuss, no waste and created individually for your home.

Glass splashbacks like works of art! There’s something about the crystal clear line drawings on the glass that looks superb. Want a sample of our print quality? Just drop us a line.

Want to be kept up to date with our new additions and collections? Pop your info in the box below and subscribe.

Floral decor doesn't have to look overcrowded and too busy, or like something you’d find in your grandparents’ house. Our floral floorcovering range could be just the way to add some unique flowery fun to your floors! Find out more: https://t.co/OU8NdqPLPI pic.twitter.com/PtuLP3opVw

About a day ago

You can’t bee serious… why honey is the hottest interior shade of 2020! https://t.co/XwVxrLrxsD With honey home decor tipped by ELLE Decoration as being a key interior trend for 2020, we wanted to share why we adore it so much. pic.twitter.com/m0RC9DLXIq

One more bright, bold & beautiful room resplendent with a fabulous fireplace (and sofa) of pure colour-pop gorgeousness! A couple of weeks inside? Curled up in here? No probs! . 📷 @LaurenGoche ・・・ #homedecor… https://t.co/vR2uZXhzzh

What gorgeous colours - the sumptuous blues, the pinky fireplace and that beauty of a chair. Not a bad place to spend a week or two curled up with that book you’ve been planning to read! . 📷… https://t.co/4mUOMFmbLr

Colour tweaks and changes are all part of what we do and here’s one from yesterday that started off as our Portland pattern. The customer gave us some paint references and colour ways they wanted to try out and we… https://t.co/hgGOH7EORh